The Barrel of Water Illustration 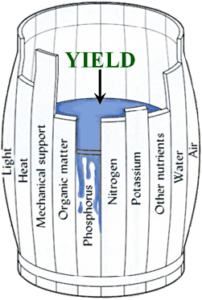 The Limiting Factor Concept can be illustrated by a barrel of water. The staves represent key factors for crop growth. The shortest stave height limits how much water the barrel can hold (i.e. crop yield).

The identification of a factor as limiting only in distinction to one or more other factors that are non-limiting. Disciplines differ in their use of the term as to whether they allow the simultaneous existence of more than one limiting factor (which may then be called "co-limiting"), but they all require the existence of at least one non-limiting factor when the terms are used. There are several different possible scenarios of limitation when more than one factor is present. The first scenario, called single limitation occurs when only one factor, the one with maximum demand, limits the system. Serial co-limitation is when one factor has no direct limiting effects on the system, but must be present to increase the limitation of a second factor. A third scenario, independent limitation, occurs when two factors both have limiting effects on the system but work through different mechanisms. Another scenario, synergistic limitation, occurs when both factors contribute to the same limitation mechanism, but in different ways.

In ecology, common limiting factor resources are environmental conditions that limit the growth, abundance, or distribution of an organism or a population of organisms in an ecosystem.  The concept of limiting factors is based on Liebig's Law of the Minimum, which states that growth is controlled not by the total amount of resources available, but by the scarcest resource. In other words, a factor is limiting if a change in the factor produces increased growth, abundance, or distribution of an organism, when other factors necessary to the organisms life do not. Limiting factors may be physical or biological.

Limiting factors are not limited to the condition of the species. Some factors may be increased or reduced based on circumstances. An example of a limiting factor is sunlight in the rainforest, where growth is limited to all plants on the forest floor unless more light becomes available. This decreases a number of potential factors that could influence a biological process, but only one is in effect at any one place and time. This recognition that there is always a single limiting factor is vital in ecology; and the concept has parallels in numerous other processes. The limiting factor also causes competition between individuals of a species population. For example, space is a limiting factor. Many predators and prey need a certain amount of space for survival: food, water, and other biological needs. If the population of a species is too high, they start competing for those needs. Thus the limiting factors hold down population in an area by causing some individuals to seek better prospects elsewhere and others to stay and starve. Some other limiting factors in biology include temperature and other weather-related factors. Species can also be limited by the availability of macro- and micronutrients. There has even been evidence of co-limitation in prairie ecosystems. A study published in 2017 showed that sodium (a micronutrient) had no effect on its own, but when in combination with nitrogen and phosphorus (macronutrients), it did show positive effects, which is evidence of serial co-limitation.[1]

AllBusiness.com defines a limiting (constraining) factor as an "item that restricts or limits production or sale of a given product". The examples provided include: "limited machine hours and labor-hours and shortage of materials and skilled labor. Other limiting factors may be cubic feet of display or warehouse space, or working capital."  The term is also frequently used in technology literature.

The analysis of limiting business factors is part of the program evaluation and review technique, critical path analysis, and theory of constraints as presented in the novel The Goal.

In the design of chemical reactions to produce a chemical product, one of the reagents may be consumed by the reaction before the others. The amount of product is limited by the supply of this reagent. This limiting reagent determines the theoretical yield of the reaction.

I hope I haven’t put you to sleep.  But I think it important to understand this concept.  Often, we think that we just need to work harder. When in reality, there are limited or unavailable factors that we are dealing with.